Shaving can be a pain for Black men with curly beards. Our thick facial hair makes us susceptible to razor burn.

That’s why we need razors tailored to our beard needs, which brought me to Bevel. Had I known of this company growing up, it would have saved me lots of razor burn as a teen.

Why Buy a Safety Razor?

Bevel, like many safety razors, only uses one blade. The blade swaps out, making the handle and blade holder a permanent investment. We call razors with this construction “safety razors.”

The price of safety razors tend to be high since they use metal instead of cheaper plastics. After purchasing a safety razor, all you need to do is purchase blade refills. You can often buy stainless steel blades in bulk, further lowering the cost of shaving.

A lot of people decide not to invest in safety razors because of the higher upfront cost. That’s why lots of Black men prefer to buy cheap disposable razors. If you invest in a safety razor’s upfront price, you’ll save money in the long run.

Safety razors don’t have much of a learning curve either. Swapping out double-edge blades appears noticeably different from using a fresh razor out of the pack, but you’re not likely to cut yourself unless you’re careless.

In addition to saving money overall, safety razors are good for the environment. Once the blade dulls, they’re much easier to recycle than plastic and metal razors.

So the ideal customer to purchase a safety razor likes the slight change in their shaving routine, can afford the upfront cost, and feels comfortable handling razor blades. If that doesn’t sound like you, maybe you should stick to plastic, disposable razors. 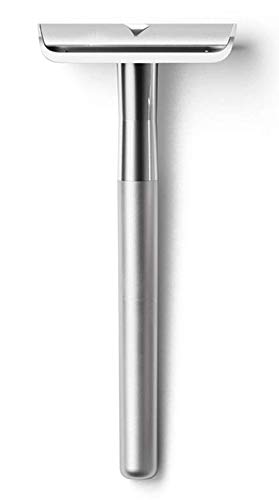 Bevel Safety Razor
Pros:
Cons:
Check Latest Price
We may earn a commission when you click this link, at no extra cost to you.

Customers notice the Bevel razor’s weight immediately upon picking it up. It’s heavy. It doesn’t feel cheap and plasticky in your hand. Instead, it bears the weight of its brass construction. The razor itself has a polished, sleek design that’s both nice to look at and easy to clean.

The Bevel safety razor promises to banish nicks, bumps, and tugs when shaving. The blade shaves at skin level, slicing through hair without harming the skin too much. Bevel promises to leave you with smooth skin that’s free from razor burn.

This razor from Bevel falls in the middle of the bell curve for safety razor prices. It’s not the cheapest or the most expensive, giving men an affordable option for sustainable metal razors.

Let’s analyze the specific features we liked for our Bevel razor review.

According to the American Osteopathic College of Dermatology, razor burn occurs in up to 60% of African-American men and men with curly hair. The curved hairs can grow back into our skin, causing ingrown hairs and other nasty inflammation that’s sore to deal with and unpleasant to look at.

Thankfully, the first benefit of a Bevel razor is that it comes from a Black-owned business that caters to Black male grooming needs. I like the inclusive approach of the brand and the fact that the razor addresses a specific grooming need that a lot of brands overlook.

After trying the product for my Bevel blade review, I’ve found that the product provides a close shave that diminishes razor burns and annoying ingrown hair.

The handle is slightly longer compared to other safety razors. As we all know, the extra length is useful because it gives you more precise control when shaving. The extra handle space also allows you to grip the razor in more ways.

You can hold the razor in various ways and get the angle you need to shave. I found the longer handle space useful when shaving my neck and underneath my chin. While I liked the handle length, the handle itself lacks any grip.

When I shave, I constantly dip the razor head in running water to clean it off. That water sometimes gets on the handle. Razors with grips have no issue when wet.

But I nearly dropped the Bevel razor once or twice when using it because it slipped in my fingers. I didn’t like the lack of grip. While grip-less design adds aesthetic value, it made for awkward — if not potentially dangerous — handling of the razor when it got wet.

3. Swapping Out the Blades

Safety razor newcomers may experience a few cuts when first using this Bevel razor. You have to unscrew the handle from the razor head, remove the two parts that sandwich the razor together.

Handling the different components of the blade may be tricky, but it gets easier over time. Besides, swapping out a blade takes less time than going to the store to get new razors.

The Bevel razor’s weight helps you get a close shave. You don’t have to press the razor against your skin to remove hair like you do with disposable razors. The company warns against pressing the razor too hard on your skin, as it’s easier to cut yourself when you do so.

Not pressing the razor to your skin requires some adjustment to your shaving technique, but it’s not difficult. Besides, the razor’s weight feels nice in your hand. You can physically feel the razor’s long lifespan contained within that solid brass construction.

It turns out you don’t need two, three, four, or more blades to get a good shave. I like the simplicity of the design, as well as its effectiveness. Buying razors in bulk brings more economic sense than purchasing disposable plastic razors.

And I enjoy recycling an old razor instead of tossing it in the trash. The single razor design lowers my environmental footprint, saves me money, and gives me a better shave.

Don’t let the low price of disposable razors fool you — they’re much costlier compared to safety razors. But how does the Bevel razor compare?

The Bevel razor is neither the cheapest nor the most expensive safety razor on the market. It would make a good investment for those hoping to buy their first safety razor, but you wouldn’t be heartbroken if it’s not the perfect fit.

If it does fit, then the subsequent blade purchase lets the razor pay for itself. In the end, the Bevel razor would be the most economic shaving choice for Black men.

I also searched the internet to see what people said in Bevel shaving reviews. Most seemed to be positive. I’m quite a fan of this review from a Bllack man who discovered a new way of shaving with the Bevel razor.

Here’s another positive review that focuses on the razor’s construction. This reviewer overcame her apprehension at the idea of spending more for a razor to find the Bevel razor a worthwhile investment.

Alternatives to the Bevel Razor

If you don’t think the Bevel razor is a good match for your needs, I’ve included a few other high-quality safety razors below. 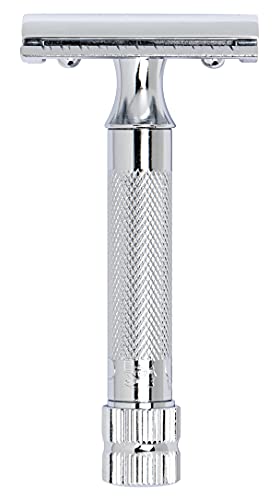 Merkur Mk34c Double Edge Razor With Short Handle
Pros:
Cons:
Check Price
We may earn a commission when you click this link, at no extra cost to you.

Merkur offers a variety of safety razor choices. Their Mk34c Double Edge Razor comes at a slightly lower cost than the Bevel razor.

However, the Merkur’s handle happens to be shorter than Bevel’s, which could mean a more cumbersome shave for men with large hands.

Consider this Merkur razor if you want a more affordable razor (and you have small hands). 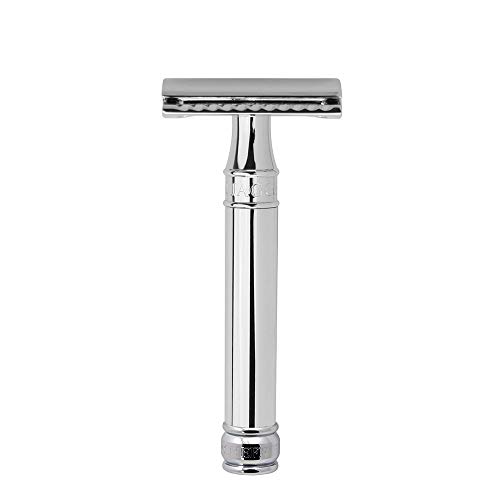 Edwin Jagger Double Edge Safety Razor, Chrome, Regular Handle
Pros:
Cons:
Check Latest Price
We may earn a commission when you click this link, at no extra cost to you.

The Edwin Jagger Double Edge Safety Razor also costs less than the Bevel. But this razor also gets slippery when wet like the Bevel, which can reduce your comfort when shaving.

Buy it if you want to save money! 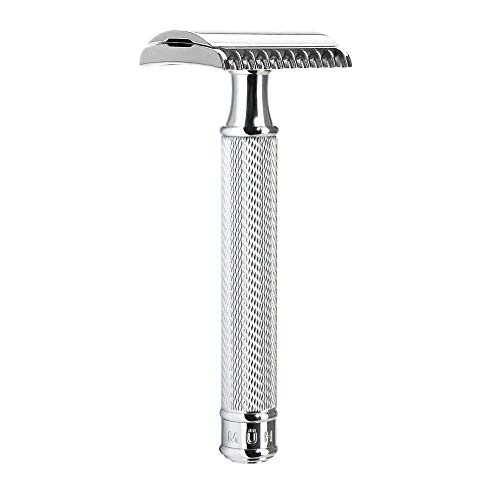 MÜHLE TRADITIONAL R41 Double Edge Safety Razor
Pros:
Cons:
Check Latest Price
We may earn a commission when you click this link, at no extra cost to you.

Not only does this Muhle razor shave your hair, but it also comes with a built-in comb so that you can style your hair as needed while shaving. It’s an ingenious addition to benefit your shaving experience.

Is the Bevel Razor Worth It?

The Bevel razor also comes in the middle of the safety razor price range. It’s a bit more than a splurge but not enough to break the bank. You can ditch disposable razors, save money, and reduce your environmental impact when you purchase razors in bulk.

We are a member of Amazon and other various affiliate networks. If we link to any product, you should assume that we’ll receive a commission when you buy it, at no extra cost to you. This is how we pay for content and product research.

Hi there! I’m Dapper Dave. I’m passionate about men’s grooming and haircare. Since our founding, we’ve published hundreds of how-to guides and product reviews. Our goal is to arm men with the skills and knowledge to look and feel their best. With that said, welcome to our site! We’re glad you’re here.